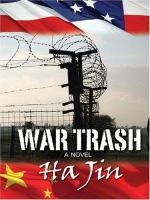 To see other titles in our catalog that have won the PEN/Faulkner Award, click here.

View other formats and editions

View all formats and editions (4)

Search for related items by subject


From the National Book Award-winning author of Waiting, here is his most ambitious work to date; a powerful, unflinching novel that opens a window on an unknown aspect of a little-known war--the experiences of Chinese POWs held by Americans during the Korean conflict--and paints an intimate story against a sweeping canvas of confrontation. Set in 1951 and based on historical accounts, War Trash takes the form of the memoir of Yu Yuan, a young Chinese army officer, a volunteer fighting unofficially in Korea when he is captured. Yu's fluency in English thrusts him into the role of unofficial interpreter in the psychological warfare--between the prisoners and their captors and between rival groups of prisoners--that defines the world of the POW camp. Yu's only allegiance is to his dream of returning home. But by the end of this unforgettable novel, the very concept of home will be more profoundly altered than Yu can even begin to imagine.
► Shelf Browser
► MARC Record
◄ Search Results Showing Item 1 of 7 Preferred library: Mark Twain Library Association - Redding?
Next ►